Chattahoochee, Florida, a town with a state mental institution on its main drag, seldom slips from its usual relaxed pace. Detached from the tourist havens farther south, it is the kind of small place where everyone knows everyone else. Senior citizen Elvina Houston, head of the little-ole-lady hotline, keeps her nose firmly wedged in the middle.

October typically brings three well-attended festivals and a break from the oppressive summer. But this year, the relentless heat and humidity linger and a parade of horribles cranks up for Jake Witherspoon, his best friend Hattie Davis Lewis, and her older brother Bobby, one that will affect their intertwined families, friends, and the entire town.

The incidents Jake perceives as a replay of his terrible assault are every bit as real as the twisted man who inches into Hattie's family.

How this group of small town folk handles the clash with hate and crime is a tribute to resiliency, friendship, and hope.

​Some days, life is enough to drive a person cathead crazy. Leave-town crazy. Change-your-name crazy. Hannah Mathis juggles roles as wife, mother, coworker, and caretaker for her elderly mother. Cathead Crazy is the poignant story of one woman's determined journey through love, loss, and the surprises of mid-life.

​​Sometimes life dishes up more than you can take--cancer, abuse, loss, isolation. Four small-town women are bound by their Southern backgrounds, friendship, and their varied but explicable reasons for wanting to check out. But life is crap and it's stupid-hot, so why would things go as planned?

The four members of the Suicide Supper Club learn that death is a process not easily dictated by a selective act of will.

Life, no matter how difficult, is a gift.

The first time Elizabeth meets Simon at Westside Haven, he is angry and scared. She's ten and he's eleven, and like her, Simon is a war orphan. When soldiers tear through their city, the two mismatched friends escape to the Emerald Mountains, armed with meager food and a map to an old cabin.

But that's only the start of their troubles. Bears lurk and winter looms, and they have little time to learn the ways of the hills.

Book one in the Tales from the Emerald Mountain series. 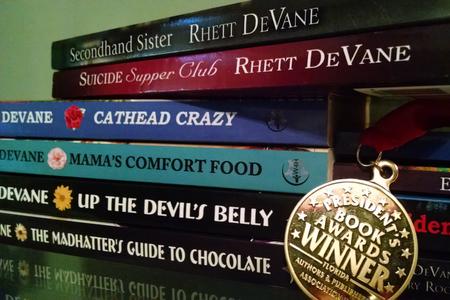 ​​​Fifty winters ago, Elizabeth and Simon fled war-torn New Haven City​ into the Emerald Mountains, where a dwarf named Taproot used his powers to srhik the two children.

These new "one-spirit beings, Elsbeth and Sim, master that same magic and create others like themselves. They live in underground burrows, dump-dive for supplies, and chat with animals. All under the watch of Taproot and the regal Pensworthy owls.

Book two in the Tales from the Emerald Mountain series.

Karen Fletcher, alias Mary Elizabeth Kensington, has it all: looks, haughty British-born facade, successful broadcasting career, beautiful home, and devoted fiance. Great, until a breast cancer diagnosis sends her scrambling to her hometown of Chattahoochee--a small Southern town with two stoplights and a state mental institution on the main drag. Karen embarks on the long and often painful journey to claim the rest of her life.

​​Mary-Esther Day Alford Sloat owns little besides her piecemeal past--a tattered childhood, misspent youth, three failed marriages, and a series of menial jobs. When she attempts to donate a kidney to her estranged mother, Mary-Esther learns a life-altering truth. The final blow comes when Hurricane Katrina destroys the last link to her beloved Nana Boudreau, and to the life she thought was hers.

With the arrival of a new generation of the Davis-Lewis family, and the opening of an upscale day spa, confidence is perking in the small town of Chattahoochee, Florida. But something evil is crawling thro​ugh the tall grass. A prominent citizen is holding a dirty little secret; one that will shake the community to its roots and leave a legacy of doubt and mistrust that may never heal. 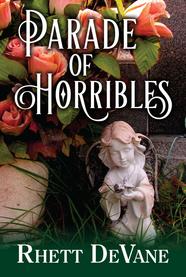 Elsbeth and Sim Kindle version
Up the Devi's Belly paperback

​Returning to Chattahoochee for her mother's funeral, Hattie Davis is drawn back into the fold of her quirky hometown. Her new life is brutally interrupted when her dear childhood friend Jake Witherspoon is kidnapped and beaten by two local teenage boys. Apparently, the discovery of Jake's homosexuality comes easier for Hattie than for some others. This touching tale of a Southern town's revival and a woman's coming of age--even over the hill--is something you will laugh, cry, and cheer over.